The Beautiful Dress almost never came to be.

The Beautiful Dress was overlooked by buyers from all of the leading fashion retailers.

We, at Young British Designers had to fight tooth and nail. Firstly to persuade the designer to join us and then...to produce, just for us, The Beautiful Dress.

After a barrage of emails and phone messages Kinder Aggugini finally agreed to meet the upstarts from Young British Who? We arrived at his sumptuously stylish London apartment one day during early Spring. This beautifully eclectic home could have had its very own catwalk show in Elle Decor. However, there was little time to indulge our senses as Kinder, cradling his teacup (he hadn't slept or eaten for four days and four nights due to creative workload) began his interrogation. Were we good enough for his brand?

This London based designer has been part of the fashion elite for more than twenty years. Educated at St Martins the Italian back of house legend has worked for Westwood, Galliano, Versace and Paul Smith. Yet this creative force has been creating his own designs for just the past few seasons.

Although his childhood was spent in Milan Aggugini longed to be in London and emigrated here as soon as he was able. It has often been commented that there is something that could only be 'London' about his styling, something erring on the quirky in an impeccably tailored way, yet always with a rebellious sideways glance.

Young British Designers fell in love with Kinder Aggugini in 2009, fell in love with everything about his designs. The way the clothes flowed on the catwalk, the way a military coat at first glance looked like a mighty fine military coat, until that is you focused on the uniquely Kinder details. The simply stunning cut, the fall and swing of the exquisite fabric, the exemplary finesse of the finish. Elsewhere we swooned at the juxtaposition of formal Bloomsbury tailoring with softly sashaying draped silks. And for all his heritage he still fits our Young British Designer profile: based here in Great Britain, in the early years of growing his own brand.

And terrifying. To begin with. His eyes pierce you to your very soul. His first question was not the expected one, what was YBD all about, but 'What is your first fashion memory?' (This will be the subject of a blog to come).

The man is fiercely bright and inquisitive. His questioning relentless. We found ourselves enjoying defending our own brand, enjoying the sport, fighting for our new fledgling under the predatory gaze of an eagle. After about half an hour, with the most imperceptible of head nods the dynamic changed. The atmosphere calmed. It looked like we were to be given a chance.

The next half an hour was spent joyously viewing the inspiration behind his AW10 collection. We were allowed into his stunning kitchen/ studio which was festooned with his sketches, fabric samples and grandiose Westwood'esque catwalk plans.

And then, onto our selections from his collection.

Sometimes an item calls out to you. (This too will feature in a future blog). Sometimes you can't wait to touch that very item, sometimes you tease yourself by leaving it until last. But there was no delaying my interaction with The Beautiful Dress.

Cream. Not just cream but a delicious Cornish clotted cream. Rich and thick, the sort that coats your tongue, your taste buds rejoicing. Mohair overdress with corset clinching fasteners. Button through boiled wool underdress. A dress that stands out in a crowd. Anywhere. The dress of the collection.

We had to have it.

NO? Kinder explained that the dress had been overlooked by all of his other buyers so it would not be going into production. With a glint of exasperation he agreed that it was a very special dress but that this was not its time. That fashion could be fickle and cruel.

We made our other selections, all wonderful but we could not rest. How could such a wondrous design not be brought to fruition. How could the world not be graced with The Beautiful Dress?

"Kinder...how many dresses would we need to buy to make this dress a reality."

He hesitated. His face softened. He told us he'd have a think and come back to us.

In August we take delivery of The Beautiful Dress. Tomorrow we are asking Kinder if we can order it in black too.

We wanted to shoot it this week but Vogue beat us to it. We are not alone in our appreciation for The Beautiful Dress.

You too can worship The Beautiful Dress. And marvel at the genius that is Kinder Aggugini. 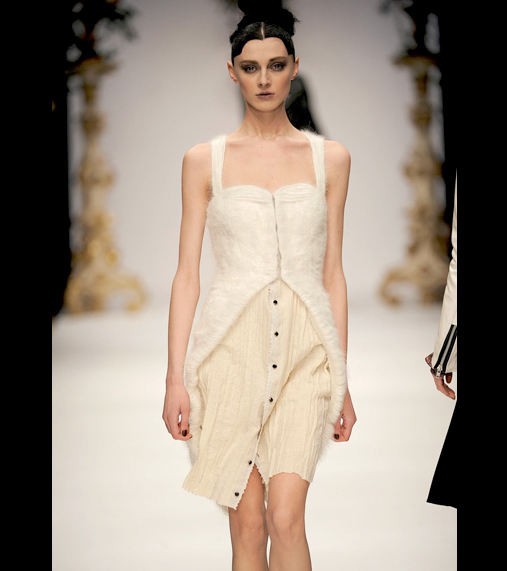