If you think you can do it, you can.

So said Dimitris Theocharidis, one half of Fashion Fringe winners JENA.THEO.

Jenny Holmes agrees: "I wish I'd got my arse into gear earlier and had the confidence to go for it. You get exhausted after college and talked into taking a real job."

Although the two met back in 2002 at London College of Fashion, they bundled up their first class honours degrees in 2006 and went their separate ways. Jenny pursued her career as a buyer and Dimitris worked in various roles including tutoring in design and fashion illustration.

"We had gravitated towards each other at LCF because we each really admired the other's work but also because we felt separate to the other students in that we continued to work throughout our degrees which were part time."

What the two also shared was the ambition to have their own fashion label and they were canny enough to know that if they were to fuse their individual styles together they would have something very unique indeed.

So, this is what they finally did. In February 2009, three years after graduation, three years into a fashion career working for other people, JENA.THEO was born.

Jenny works on voluminous and challenging pattern cutting whilst Dimitris focuses on the silhouette and delicate tailoring. The combination of these two sets of skills is nothing short of intoxicating. This is a unique and heady mix of British and Greek heritage combined with modern ideas and attitudes. To see a JENA.THEO creation come towards you on the catwalk is not like anything else you will have previously experienced.

And, although the two seem to keenly regret not having plunged in and launched JENA.THEO upon leaving college, we at Young British Designers have a sneaky suspicion that the paths they chose back then have led to an even more special collection today. A collection that resulted in them being awarded Fashion Fringe 2009; the platform to discover, nurture and support the hottest emerging design talent in the UK.

There is a pragmatism to the pair, an eye for detail, an experience that belies the label's tender age, a commercial nous, an understanding of the need for wearability juxtaposed with the need for individuality. Jenny and Dimitris had to be grown ups back at college, there was little time for frivolity, for transient fun, for the headlong investigation of blind alleys. They were there to study, to learn and to achieve brilliant degrees, They were not cocooned within the educational establishment, as so many of us are, but were very much part of the real world.

This is not to say that the pair's creations are anything like as sensible as this may suggest. One could not be further from the truth. If anything they are astonishingly fantastical, yet they work. They are painstakingly conceived, take risks with pattern, with graphic, with cutting, with shape, with volume. And it all plays out. Because the two would not allow it to be any other way.

When I first saw a JENA.THEO moving towards me down the catwalk my first impression was one of immense power. The form and fall and flow of the fabric is entirely self assured. It is masterful in its own right. It can be worn this way. Or that. Back to front. Front to back. Outside in. Inside out. The holder chooses, the beholder looks on in wonder.

It was interesting watching our models try on the JENA.THEO Autumn Winter collection. Whether it be the Inside Out Jeans, the mohair playsuit, the Great Coat, the Rolling Drums dress or the myriad of other creations, the effect was the same. The items were held out, noddingly appraised, shrugged on and the wearer was immediately transformed. They strutted, stretched and swung around the set. They hugged themselves within the folds of fabric and twirled with rapture at the feel of it. They became empowered, magnificent creatures who turned into feisty, snarling dragons when we tried to remove them from their magic garbs.

We, in turn, couldn't take enough photographs. Where to start? Where to finish? How to convey the magnificence of these creations? Their movement, their flow, the way they were made entirely unique by the wearer.

The detail on just one pair of leggings had us scrambling headlong with lens in hand along the studio floor. Surely these will be the leggings of the coming season.

And all of the pieces are uniquely stamped by the duo. Blues, greys, creams, blacks, type that captures the eye and leads it along triangular lines to another bend, a twist that nudges into a knot, the back of a knee, an underarm exposed.

In all of our dealings with JENA.THEO we have been met with a calm and measured professionalism. An eye for and a demand of the finest quality.

It is as though the label has been established for some years already.

Which in many ways it has. In the hardworking hearts and minds of this extraordinary pair.

It may have taken a few years out of college to be made a reality. But all of the years JENA.THEO have spent working in fashion have counted towards this very moment.

They always thought they could do it. 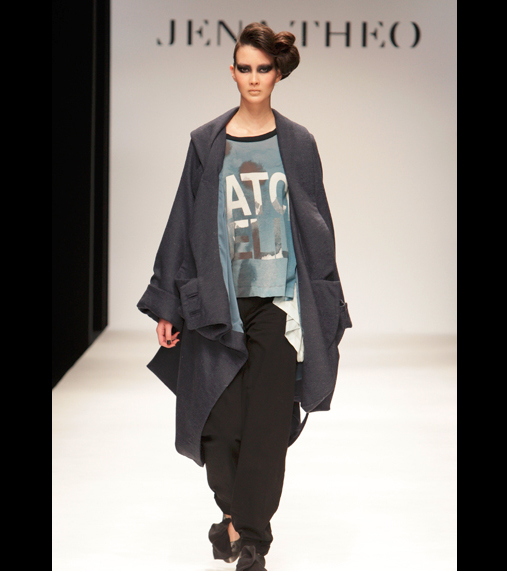