Remember back when we were interrogated by the great Kinder Aggugini about our new venture (see earlier blog entitled 'The Beautiful Dress'). The fearsome Italian Londoner needed to know that we loved fashion. Really loved fashion. That we were vibrantly alive to all of its colour, shape and texture.

He pounced quickly and in an unexpected way, asking us to recall our earliest fashion memory. He kindly shared his, or rather his mother's, earliest recollection of him being addicted to couture: Kinder, as a tiny toddler, standing with his face pressed firmly against the Chanel window during a fierce Milan winter. Such is the charm of the man that he can attribute his visage 'pressing' to the welcome heat coming from within the store as much as to the hallowed items displayed therein.

I remembered the moment I fell properly head over heels with fashion. Irretrievably. Completely. Accompanied by my first taste of impending financial disaster.

It was post school. Off the bus at the High Street, reluctant to march straight home as was the norm. Eager to spend some teenage time alone in the stolen space between schoolgirl and daughter. Coffee or bookshop? Miss Selfridge maybe? I meandered along teasing myself with all of these grown up, terribly independent choices. I was fourteen.

There was a second hand clothes shop. We would call it vintage today and hold it in the greatest esteem. But I had never even considered going in there. Until this day. Something brave made me push open the heavy wooden door and enter. The ring of the bell, the sudden feeling of being locked in all served to make me regret my action but the hooded eyes of the shop lady made me stay. I had to look as if I knew what I was doing. For saving face sake.

I flicked through one rail and stepped over to the other. One more to go and then I was out of there. But that's when I felt it. A rich fluid weight of black material. It leapt to life in my hand and I had to pull it free from the rest. It was nothing like anything I'd ever seen before. A sculpted smooth black sheath made from impossibly fluid yet boned silk. A sheer chiffon netting sat above the bodice which extended in a swathe to the collarbone and down to the elbows, a black satin edge to the chiffon at the sleeve ends and dipping over the shoulders to the mid back. I didn't know that clothes like this existed in real life, only upon some faraway Hollywood screen.

The matriarch's face had softened a little. "Go on, it will suit you. Try it on."

I can't begin to explain how slipping that dress over my head made me feel. The rush of silk against my skin, its coldness which became a living warm. Its cosseting of my frame, its caress. All that I had known, all that I had worn before had become mere body protection, pretty nonsense to cover me up, to keep me warm. This was about art, creation, the divine. This dress made me glow. Someone very special had had a vision, had thought through every stitch, every detail, every drape, every texture, every which way it interacted with a woman's shape. Someone had wanted to make someone else feel, for a moment, a night, for every time she wore it, like a Goddess.

All of my money in the whole world at that time added up to Â£5.00. The dress was labelled Â£5.50. The very nice, after all, hooded eyed lady allowed me to have it. I had no more money for an entire month. I didn't care. I would have happily starved.

I still have it. The point of this story is not only to proclaim the obvious to the world- that Young British Designers love fashion- but to demonstrate one of our founding principles: if we don't love it we don't stock it. Sound business advice would say that this is a fatally flawed model, that we should stock the popular, the proven, the safe. But that, for us, flies in the face of a true love of fashion. Fashion is intensely personal, intensely emotional. Fashion is about risk, we've said it before and we'll keep on saying it. Our designers take risks. some of those risks thrill us to the very core:

But there is nothing that you will see this September that hasn't been chosen with all of the passion aroused in a fourteen year old girl by a 1940's dress many, many moons ago. 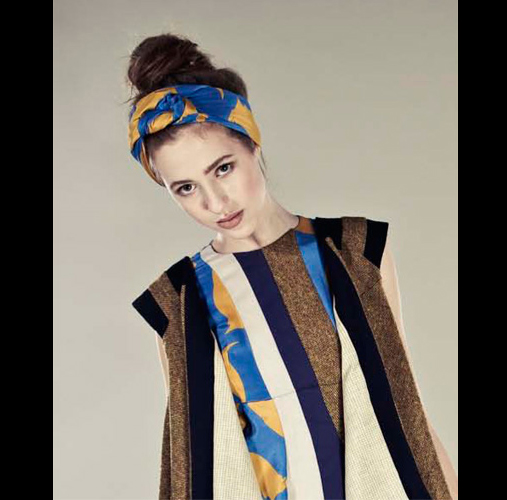 What's your earliest fashion memory? Tell us and we'll send a silken Charlotte Taylor penguin headscarf to the entry/entries that make us smile, laugh, cry...Contact us via Twitter, Facebook or right here.