Knit The Way To Do It.

Occasionally we happen upon a young designer who has taken the less conventional path to finding her art. Someone who's chosen to turn her ordered world upside down in pursuit of a creative dream, a life more fulfilled.

Meet the lovely Louise Dungate. Louise had a glittering career as an up and coming creative in the advertising business. The job was high pressure  and high stress and to help herself (along with her colleagues) to relax Louise joined an after hours Knit Club. Knitting was something that Louise had always been enthralled by, from the early days of her childhood, from time spent with her Gran and Aunty (both avid knitters) and from her own early interaction with the big pointy needles.

Louise soon found herself enjoying the Knit Club so much that she carried on knitting voraciously out of hours. Friends and family quickly seized upon her ensuing produce and the orders started coming. So much so that Louise had to make the decision to completely change direction and pursue this new, albeit first, love.

Louise tells the stories of how both her grandmother Nancy and her great aunt Betty learnt to knit at school, at the age of 4. She loves the tales of how they would knit socks for the soldiers, and on Fridays at school they would have to bring something in from home to mend. Often it would be a holey jumper, belonging to Louise's great grandfather. 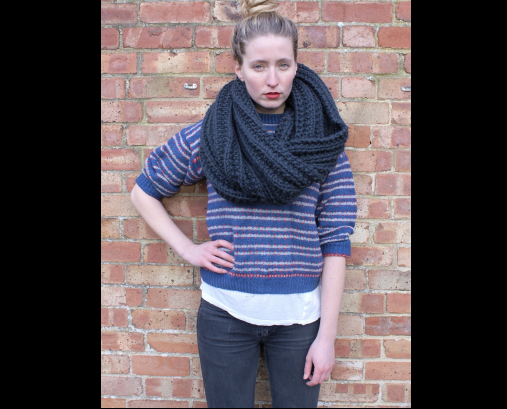 We met Louise soon after she'd made this momentous move and were bowled over by her risk taking, her sense of adventure, fun and "life's too short not to do what you love" mentality. Not only this but Louise creates the most wonderful knits with those busy, clever fingers. Wrap yourself in one of her pieces and feel at once embraced and all aglow.

Louise strongly believes in ethical and eco-friendly fashion. She knits with natural yarns, and uses recycled materials/packaging wherever possible.

Her chosen quote for her brand ethos emanates from Roald Dahl:

'And above all, watch with glittering eyes the whole world around you because the greatest secrets are always hidden in the most unlikely places. Those who don't believe in magic will never find it.'

Try her, wear her, be inspired by her.