When someone says to me "London Fashion Week" three things go through my head. The first is the visceral thought of the pain of over a hundred show requests. The second is the dread of how sparse my wardrobe is and how the h-e-double-hockey-sticks am I going to create five different outfits without looking like an absolute plebe. The third thing is something I can't describe, but it makes me feel fairly giddy and nauseous at the same time. Go figure.

Fashion week is a figurative pain in my rear end. Early mornings, late nights, inflated egos, seeing that person you can't tolerate, having serious outfit envy - it all adds up to me saying "I hate fashion week" over and over until my assistant has decided she's sick of me. And yet (and maybe this is the masochist I didn't know I had in me) - I bloody love it. London Fashion Week tends to be the smallest week. For those of us based in London, we attend the shows from the first day of five. For the international set, the first day begins whenever the big players like Mulberry are on the field, and ends two days later. But for five glorious days twice a year, you get to see the clothes that people will be coveting in six months' time - and you get to see them first, even if you're not physically at the show itself. 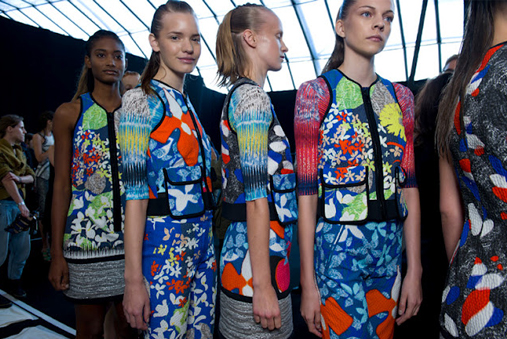 For me, London has rightfully earned its place as a fashion capital. Between our heritage brands like Burberry, Mulberry, Paul Smith and Pringle of Scotland, we've got our upstarts which make fashion-fanatics go hysterical each season - Peter Pilotto, Mary Katrantzou, J.W. Anderson (who's available on YBD, wink wink, nudge nudge) - all are coveted by the best and stylish. Between the classic, elegant styles courtesy of Mulberry's Emma Hill to the electro-cool graphics of the Peter Pilotto boys Christopher De Vos and Peter Pilotto, London is a hub for creative talent. And whether or not you get to go to one of those shows, you know that they'll create something so beautiful, you'll want everything right this second. No, not in six months. Now. As in, I'm ripping those trousers off of that model's skinny legs and putting them on myself, now.

Sorry. Got a little carried away.

Obviously, there's the downside of not getting in to a show, or not receiving a ticket to a show you sat at last season. But that's all politics, and perseverance is a must. And even if you know you'll never receive an invitation to that Burberry show, you'll still appreciate, review, and buy. That's what makes London Fashion Week such a key event. As an editor, you're constantly editing the collection you see down to key pieces, key looks. What will look good with that Burberry trench? What about that David Koma dress? Is it possible to wear that Katrantzou dress without getting weird looks on the Tube? But at the end of the day, you're telling people what you saw. You are the most important person to the people who didn't see that show. It is your duty to relay the information to them.

There is nothing quite like London during fashion week. And it all emanates from Somerset House. The powerful aura of the entire industry's most powerful people in one place. It is intimidating â¬â one second, you're chatting with a stylist you've met, and the next you're leaving a show standing next to one of British ELLE's top editors. One second, you're saying goodbye to a colleague, and the next you're face to face with the editor-in-chief of British Vogue. But then you remember they're here for the same reason as you - to do a job.

At the end of day - or rather, week - you may be exhausted, you may have not eaten for three days, and you may need to go to a podiatrist to fix that broken toe from having your heels get caught in a cobblestone, but in the end it's all worth it when you're in that show, watching the pristinely dressed models walk down the catwalk.

London Fashion Week, as always, you were a work of art. See you in six months.

Colin Dawidziuk is the European Fashion Editor for KENTON Magazine