Ethical production doesn't always result in the most fashion-forward apparel. But that's absolutely not the case with London-based designer Eleanor Dorrien-Smith, whose past experiences include working for John Galliano, Mary Katrantzou, Eley Kishimoto and Anthropologie. Proving high style can be synonymous with sustainability, Dorrien-Smith became an entrepreneur when she launched her ready-to-wear collection, PARTIMI, just two years after graduating from Central Saint Martins in 2008. By meticulously controlling every step of the production process—from sourcing the fabric to finding local manufacturers in the UK—Dorrien-Smith has been able to responsibly breathe life into her designs. The upshot is an assortment of relaxed, unique pieces boasting clean lines and arresting landscape-inspired prints which each tell a different personal narrative—an intimacy that's difficult to find in high-end fashion. 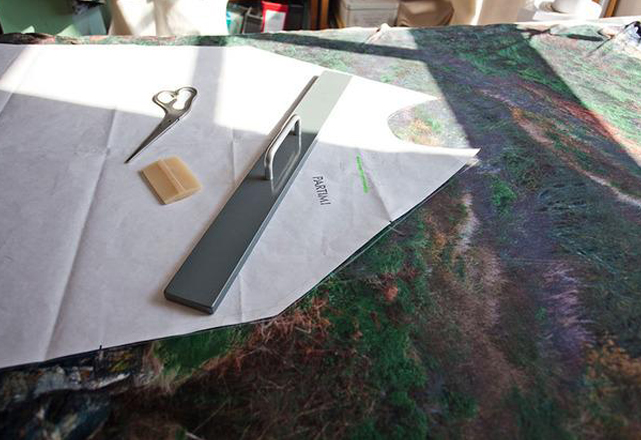 Dorrien-Smith starts brainstorming by taking her camera and snapping photographs of a location which will serve as the inspiration for an upcoming collection. "Usually it's a location that I have a personal affinity with, so it will be my mom's hometown or my dad's hometown or my teenage years—somewhere that means something," she explains.

PARTIMI's AW13 collection was inspired by Dorrien-Smith's childhood town of Guernsey in the Channel Islands, a small archipelago located between England and France. "I spent 11 years of my life there. It's very rustic, coastal and so this is kind of the reason for the landscape print. It's not a very picturesque cliff face, but it's very wild—the rocks are kind of falling through. I like the imperfection, I just think that's very beautiful." 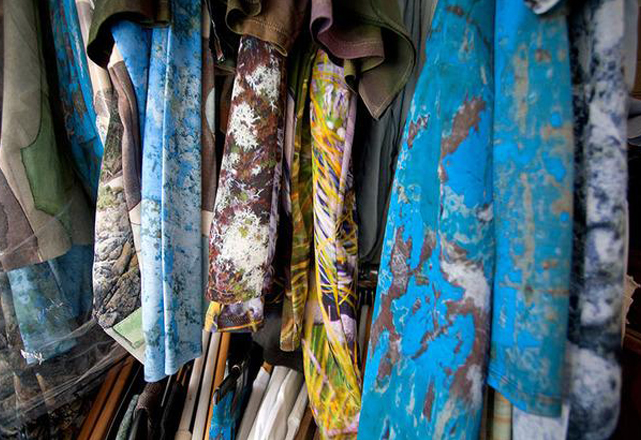 The unique bright blue hue found in some of the prints is particularly eye-catching, and almost seems to animate the fabric. Dorrien-Smith says, "The blues in the collection are actually photographs of the undersides of tiny little fishing boats that get dragged up the beach. If you look underneath them, you can see the different layers of paint that have been put on, so you get these different layers of color, and get some of the rust coming through. It's the same kind of effect you'd get on an old painted door in Sicily or something, but I love that it's a fishing boat." 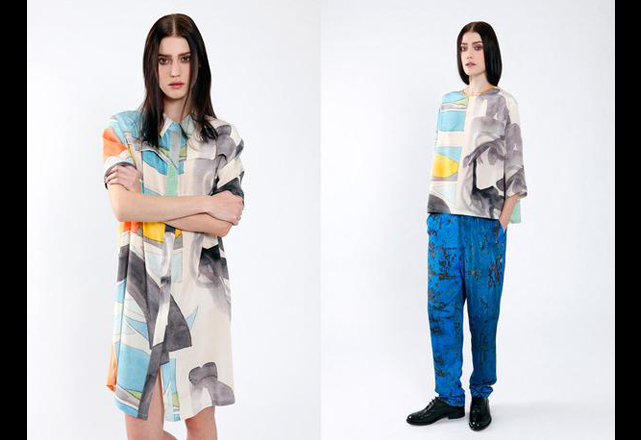 Surprisingly, the quietly vivid hues of watercolor comprising her designs were inspired by arranging book covers and hand-drawing the resulting collage. "They're actually my favorite books from the time: JD Salinger's 'Nine Stories,' Kerouac's 'Lonesome Traveler' and Hemingway's 'Old Man and the Sea.' Very typical, everyone's favorite teenage books that you think you're so individual at the time for knowing about," says Dorrien-Smith, laughing. "As a teenager, I would go and sit on a top of a cliff and read or draw. Looking back at that kind of confidence that you felt when you were just discovering everything—you just had no end for thirst for looking up new artists or musicians, you were unfettered by everyday life." 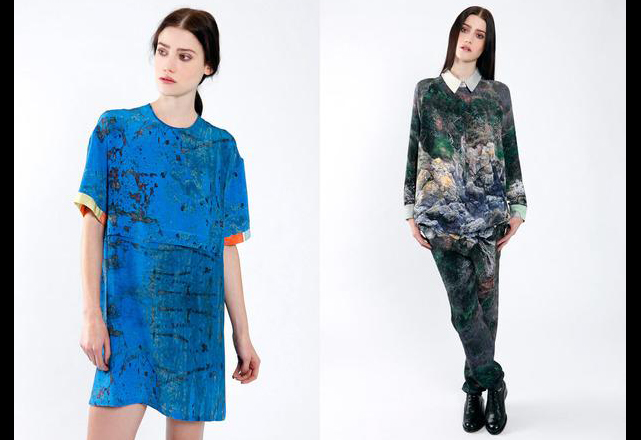 After developing the prints and hand-drawn designs, Dorrien-Smith sends the artworks to a printer in Sussex. "Then we create the patterns and do the grading for all the different sizes and, when we're prepared, we take it over to the factory, which is only 20 minutes away from my studio. It's run by a Bulgarian family—a brother and two sisters—who are the sweetest people." Being in such close proximity to these facilities, instead of outsourcing to a foreign country, allows Dorrien-Smith to be aware and actively present in every step of the production process.

After ordering organic silks and experimenting, the industrious designer learned that it generated a lot of waste in the process because her units weren't very big, resulting in losing meters: "It was very costly and it wasn't very fair to pass that on to the customer." She now uses silk and modal (fabric reconstituted from beech trees) that are stocked in the printing factory. "The more I looked into different production methods, finding out those bits of information, just made me think, 'Goodness, I don't want to do it that way, I want to try to do this the best way I can,'" she says, on keeping it local and cost-effective. "It's a continuous research project, there's no perfect answer yet." 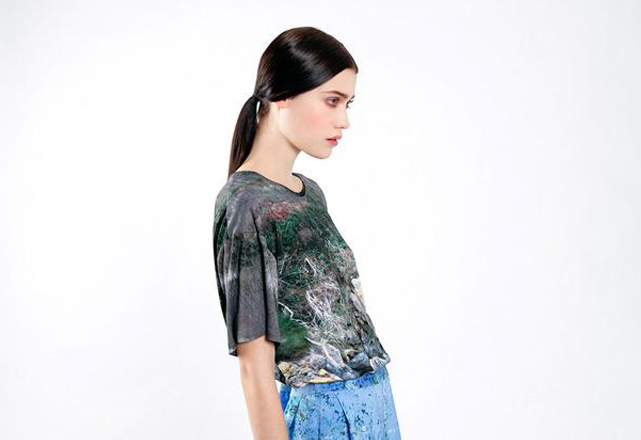 PARTIMI will be making its US debut this week, which is of personal significance for Dorrien-Smith, who is half-American. The AW13 collection will be stocked in select Manhattan boutiques including Albertine in West Village and No.6 in Little Italy, as well as Mr. Larkin in Houston, Texas.

The SS14 collection revisits an even smaller island that inspired a previous collection—the Isles of Scilly in Cornwall, where Dorrien-Smith's father is from. It will feature prints based on the Tresco Abbey Gardens, home to exotic plants which her family have planted over the last 150 years. Dorrien-Smith says that seeing tropical plants from Brazil to Australia thrive in such a northerly latitude is "very magical and there's no end of inspiration." The reception from friends has also led Dorrien-Smith to launch a test capsule for a men's collection in January, which will be exclusive to the PARTIMI website.